Does hitting innocent plastic animals with a hammer makes you queasy?

Don’t worry, instead, you can hit your friends with an inflatable hammer with no such regrets. Meet the Human Whack-A-Mole.

You have probably already guessed what the premise of the game is. Still, let us explain the rules.

This inflatable 14’x14′ game can involve 6 people, 5 of which play the role of moles. The main player stays in the center surrounded by a pool of colorful balls and armed with an inflatable.

The aim of the moles is to steal as many balls as they can and store them in pouches below the surface. But if they get hit by a hammer, they can’t take the ball and need to go under and try again.

Obviously, the player who steals the most balls wins. But we guess anyone who gets to smack their co-workers or friends with an inflatable hammer will feel pretty victorious. 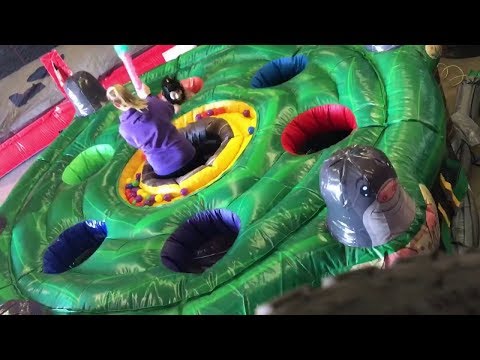 Human Whack-A-Mole
CHECK IT OUT