The Toyota Hilux Expedition V1 Camper is not only an indestructible off-road vehicle but also a fully equipped camper, custom built by the Awesome Photographer Stefan Forster with help from Hurter Offroad, Geocar and Arctic Trucks Iceland.

Anyone who knows something about cars will tell you that Toyota Hilux is one of the toughest cars money can buy. It was proven in various tests and even the world-famous Top Gear gave it a nickname “Indestructible”.

When conquering vast terrains, far away from any signs civilization, this awesome expedition vehicle is the best choice you can make. This one is even more upgraded.

It is powered by a 3 liter 225 bhp diesel engine and equipped with all sorts of off-road gadgets, such as a TJM snorkel, a WARN cable, HELLA lights, locked diffs and better-protected underbelly.

But what differentiates it from an ordinary pick-up is not the technical gadgets. It’s a fully grown living space, situated on the pack. It has a bed, couch, table and a fully equipped kitchen. All neatly packed in the back, without sacrificing its’ role as a 5 sitter car.

So forget about your old and boring RV, which is huge, clunky and will get stuck in a small muddy puddle. This car will get you anywhere you with as much comfort as possible, as long as you have enough fuel. Now that is a true all package deal!

Reminder: not for sale, was a built as a project by epic Photographer Stefan Forster Feel free to try build one yourself! 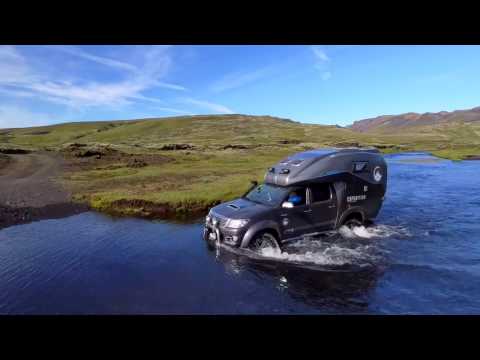 See our list of coolest gifts for truck drivers!