Zombies are not everyone’s cup of tea. Nevertheless, zombie movies gained massive success indicating that this genre is loved by a lot of people. Some people even make their own undead clubs and hold zombie-themed parties. If you are one of those guys, you may as well jump into the zombie figurine collection.

Collecting zombified action figures is a lot of fun! You can have a horde of undead to decorate your shelf or desk. Suppose you are looking for a creepy living dead figurine to complete your set. In that case, the following creepiest zombie figurines are worth collecting for any fan of the genre.

We all feel devastated as we witness the old wolverine died in that Logan movie. But what if he’s not dead, and plot twist, turn into a zombie instead? Plot-wise, it wouldn’t be impossible in the actual movie, but fans can create any plot they like outside of the X-Men Cinematic Universe. So here it is, a wolverine zombie in his iconic X-Men uniform that will make a great decoration in your house.

Do you think we’re gonna stop there? Of course, we won’t! We have another Wolverine zombie, but it’s in his old X-Men uniform this time. This figurine uses the comic book design instead of the Logan movie design. In any case, this item is an excellent gift for Marvel comic lover who happens to love zombies. You can also collect it yourself to complete your set.

Rated 8.2/10 on IMDb and 80% on Rotten Tomato making The Walking Dead one of the most successful zombie series ever. If you are a zombie lover, you have probably already watched the series yourself. If you are thinking about starting a zombie figurine collection, this is a good way to start.

This zombie figurine has an alien-like appearance. Even a non-zombie lover would not mind having this figurine in their room. It is creepy but still cute, making it a fabulous decorative piece in a teenager’s room. It comes with 4 eye beam effects that you can swap. So yeah, this one is a lot of fun!

Having a zombified figurine of a famous politician is hilarious. Anyway, whether we are zombie lovers or not, ain’t it fun to have at least one politician zombie figurine? It will make a funny gift for zombie lovers and someone who is into politics and wants something to display on their desk.

What would happen if a paragon of justice turns into a mindless flesh-eating monster? Zombified superheroes are super popular among fans. There’s a quirky contrast between evil and good that makes such figurines look a lot more interesting. This factor has made zombified superhero action figurines a unique collectible item.

This zombie iron man looks like it was made out of real iron, giving it a unique texture. The figurine itself is so cool and will be a great decorative item on the desk or shelves. It will be a great gift for both zombie lovers and Marvel fans.

These undead sports fans have risen from their graveyards for a vengeance! They are terror-bent on getting revenge against their rival clubs! That’d be a fun way to start a zombie B movie. You can get this collectible walking dead figurine that features torn clothing with the colors and logo of your favorite sports team. So which team do you want to buy?

This zombie figurine features jointed limbs so you can adjust its pose! It depicts an undead with a half-torn used-to-be suit. The action figure shows that he’s only wearing one shoe makes him look extra zombie-ish. After all, we all know that zombies can’t think and let alone put on shoes on both feet. This figurine will make a perfect prop for Halloween!

Do you want to stab a zombie every day? Then you should definitely get this zombie pencil holder. It serves as a creepy decoration and also a functional pencil holder. Use your pencil and once you finish, stab it back into the zombie! It will be a fun experience that will help you be more organized.

Can a statue turn into a zombie? No. But there is something incredible about seeing a still object modified into something creepy. In this case, we have a unique figurine of the Statue of Liberty that has been zombified. It makes you think that zombies may perhaps form a community and build their own liberty statue one day. Another interesting B movie plot to think about.

Seeing a regular zombie character may not freak you out that much, especially if you are a horror fan. However, when a seemingly harmless character becomes an undead, it becomes extra spooky. So, this zombie gnome will make a great Halloween prop! If you feel funky and want to create a spooky themed Christmas Nightmare Before Christmas style.

What to get a car lover who is interested in zombies? Wonder no more! A set of mechanics undead figurines will be perfect. This set includes 4 mechanic zombies, but you need to note that the figures don’t come with the car. Fortunately, if you already own miniature vehicles, you can pair them with whichever model you want.

Another masterpiece turned into a zombie. The thinker statue is a renowned sculpture adored by everyone in the world. This is why the thinker zombie figurine will make a great gift for art lovers, zombie lovers, or philosophers in general. This item is handcrafted by a skilled creator, so it is pretty valuable. Definitely a great piece worth collecting.

The “see no evil, hear no evil, speak no evil” wisdom is very popular and it appears in so many art forms including zombie figurines. These figurines will make a great accent on your shelves. Embrace that creepy zombie vibe while remembering the wisdom they try to share. Isn’t it cool?

Seeing a zombie head eaten by a raven is probably the most hardcore thing you will ever witness. Make it a figurine, and we will witness this creepy horror every day. Who wants to see this other than hardcore undead fans? This figure will make a great addition to your zombie collection.

This zombie figurine is a fantastic and functional accessory. It features a Walking Dead zombie coming out of a grave. And the best part is, the ‘grave’ is a practical jewelry box you can use to store your gemstones in it. You can also use it to secure any small knick-knacks that you have. 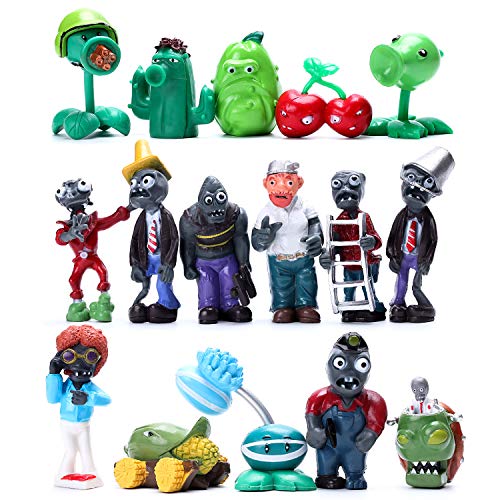 Let’s check out this adorable zombie for a change! The Plants vs. Zombies game is a timeless classic, and many people have played it. This figurine set features some of the most popular characters from the zombie and the plant sides. Do you play this game too? Which plant or zombie is your favorite?

This set of zombie figurines is so funny and quirky! It will make an excellent horror-themed decoration for your desk or shelves. Each zombie holds a sign that contains a hilarious statement. Despite their hideous creepy appearances, their sense of humor is on point. 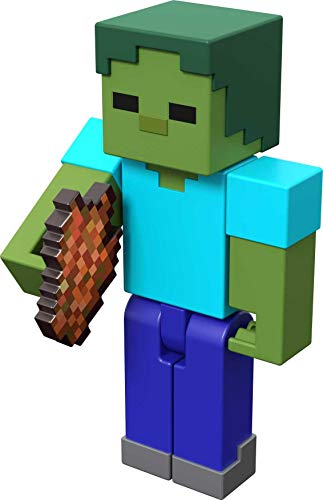 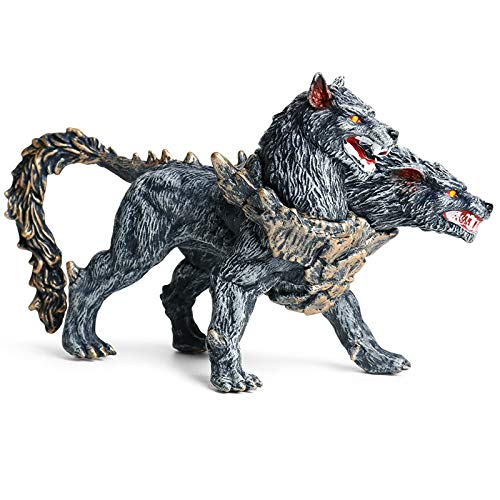 Cerberus is the creepy guardian of hell’s gate. And so, this superb zombified Cereberus figurine will grace your collection with extra creepiness. You can have this figurine up on your desk and feel a hellish vibe every time you see it. The Cerberus design is superb, adding a welcoming atmosphere to your working or study area.

The most thrilling part of any zombie movie is probably the chasing scenes. Running away to save your life from a horde of hungry undead would get your adrenaline up. This is why this particular figurine that shows a chasing scene will make a nifty addition to your collection.

Zombie stories usually feature a survivor who got bitten and turned into a zombie. This time, this figurine depicts an unfortunate grandma that has become a creepy undead. It is very well-designed and gives off super unsettling vibes, the perfect item to complete your collection!

This could be the scariest zombie figurine ever. The executor himself from the Resident Evil game! This figurine offers a detailed mold and paint job that looks realistic and extra scary. It will make a great addition to the zombie figurine collection but don’t display it in the living room because it may spook your guests

The classic zombie housewife action figure is appropriate to end the zombie figurine list. The old-school zombies love to eat brains, and having an undead housewife serving a brain for lunch is such a typical zombie family thing. Because of its retro theme, this figurine is a worthy item to collect!

What are the best collectible zombie figurines?

The best collectible zombie figurines should be the one that is made in limited edition. They usually offer different detailed molds and outstanding paint jobs. This kind of figurine will become a lot more valuable in the future due to limited supply and higher demand. A rare action figure can be nice decoration as well as an investment.

What are the best zombie toys for toddlers?

The best zombie for toddlers could be the one that is made out of soft and non-toxic materials. You can buy them a soft zombie toy, plushie, or squishy. Make sure that the item does not include sharp edges and small parts. You also should pay attention to its size because a smaller toy can be a choking hazard.